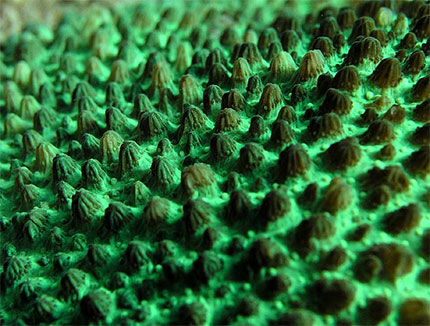 Hydnophora coral originates in the Indo-Pacific ocean, Figi, Tonga, Solomon Islands, the Great Barrier Reef and Eastern Africa. It is considered a Small Polyp Stony coral (SPS) and is considered extremely aggressive towards other marine aquarium invertebrates. The coral is not readily available and never found in abundance.

Hydnophora coral is moderately hardy. The skeleton of the species is branched, flat and irregular in structure, and are generally cream or green in color. The species is generally characterized by mound shaped structures called hydnophores from which the polyps emerge. This type of coral has sweeper tentacles for feeding purposes.

Hydnophora should be placed anywhere between the middle and higher level in your stony coral dominated aquarium. The colonymust have plenty of room, at least five inches all around the coral, so that it can spread without any obstruction. Keep all other marine invertebrates away from the species in your marine aquarium, as this coral may kill them. The coral grows quite rapidly under favorable marine environments.

The Hydnophora species requires high lighting in the marine environment it inhabits. Water flow to the coral needs to be high and intermittent water current. Metal halide lighting or actinic lighting in blue shade are recommended. Fluorescent lighting and power compacts are also fine as long as they are high output. The coloration, growth and survival of Hydnophora coral may vary depending on the intensity of the light it is exposed to.

The species derives its nutrition mainly through photosynthesis, which is performed by zooxanthellae, a photosynthetic algae living symbiotically within the coral. It can also be carnivorous in feeding habit and filter feeds a few times a week, when open. It is important to keep the calcium, strontium, and iodine levels up in the aquarium, and the phosphate and nitrate levels as low as possible for best health. It eats acellular marine invertebrates, meaty bits in the form of paste, phytoplankton and zooplankton.

Hydnophora coral is difficult to maintain, and is not recommended for beginner aquarium enthusiasts. This type of coral has powerful stings, and it should be kept as far away from other coral species as possible because Hydnophora may sting them, which may result in death of the coral within the marine aquarium.