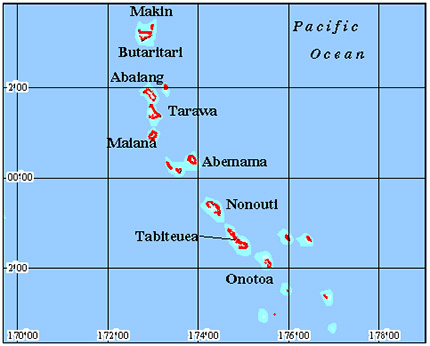 The Republic of Kiribati, in the Pacific Ocean, boasts 33 atolls and coral islands, being considered one of the most unspoiled places in the world. It has some of the most well-preserved coral reefs, forming a pristine ecosystem and a breathtaking marine landscape.

Isolated, far from cities and aggressive civilization, scattered over 3.5 million square kilometers in the Pacific, the ring-shaped coral reefs of Kiribati are a perfect place to dive and study the beautiful and almost untouched marine life and the corals themselves, which look almost the same as they did 1000 years ago.

The Phoenix Islands reef system, containing 8 atolls and 2 submerged reefs (Carondelet Reef and Winslow Reef), is the largest protected marine area, and it is home to more than 150 species of corals and also to an abundant marine life (520 species of fish as well as other animals and birds).

Visitors will get to see mesmerizing channel patch reefs, outer reef slopes and lagoon reefs, as well as encounter an incredibly diverse marine life, from snappers, surgeonfish and parrot fish to a variety of turtle species and rays.

The Millennium Atoll is home to one of the few pristine coral reef ecosystems left in the world. The deepest areas give home to large platforms of a stony coral species called Favia Mathaii, which provided the base for the dominant corals, Acropora, to grow and form the reticulate reef structures. Divers in this area will also get to see a variety of algal communities, including Crustose Coralline, Caulerpa and Halimeda, as well as encounter a variety of marine life, such as the Napoleon Wrasse and the blacktip reef shark.