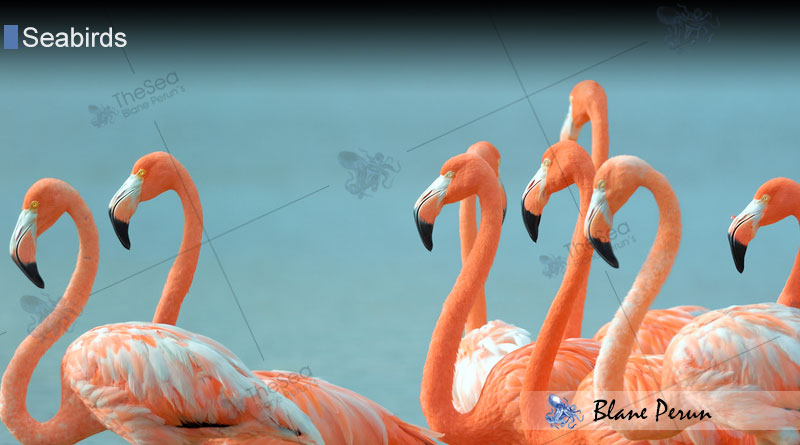 With their brightly colored feathers, their long legs and their graceful looks, flamingos are among the most easily recognizable water birds. They derive their name from the Spanish word “flamenco”, meaning “with the color of flame” and they are flame-colored, indeed, but many of these beautiful birds go through episodes of discoloration, so the question obviously rises: how do flamingos get their characteristic coloring?

When flamingos hatch, they are of a grayish color, but they soon get their bright coloring from the food they consume. Their staple diet consists mainly of small crustaceans such as shrimps and blue and green algae that contain beta-carotene in high concentrations. The enzymes found in the flamingo’s liver decompose the food and separate the orange and pink pigments that are transported by the bloodstream to the feathers, the legs and the bill, where they get deposited, resulting in the beautiful colors. The diet determines the exact shade of the pink, too – the birds that eat only algae tend to be darker-colored, while those that can pamper themselves with crustaceans that have already digested the algae particles are brighter in color. Flamingos seem to be uniformly pink, but in fact they are not – they have black feathers under the wings, but the black patches can be seen only when the bird is in flight.

There are actually six flamingo species known to scientists today, but they all look very similar and they belong to the same genus. They are all colorful, about 4-5 feet tall and they all weigh around 4-8 pounds, making them surprisingly lightweight for their size and extremely graceful flyers.

Flamingos live in South America and in Africa, in areas of shallow water where they can easily stir the muddy waters with their beaks to obtain food. They usually live in colonies of a few hundred, often displaying their mating dance together. Each colony has its own dance, with slightly different movements and slightly different accents. They form pairs that stay together for a long time – the male and the female choose a nesting place together and they feed their young together, too. After the eggs hatch, both adults stay around the nest for about a week, when the young start leaving the nest to explore the area around. When the chicks are around two weeks old, they come together to form a crèche and continue their lives without their parents.

Flamingos feed their chick with a substance called crop milk that they produce in the upper part of their digestive tract. The milk is very rich in nutrients, containing proteins, white and red blood cells, and fat;
Flamingos appeared at least 30 million years ago, being among the eldest bird species;
Flamingos prefer habitats that offer very little food for other species – therefore, they don’t have too many natural predators;
Flamingos hatch with a straight bill – it becomes curved only later on during their lives.

Now you know not only what makes flamingos pink, but also some other interesting facts about them. The more you get to learn about these elegant birds, the more fascinating they get.