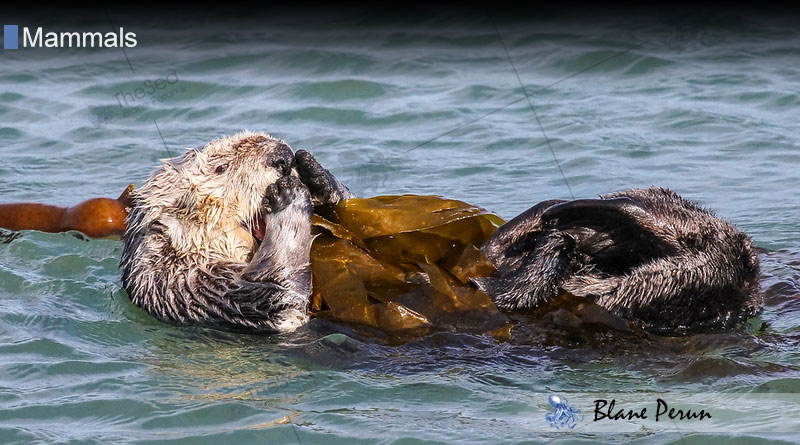 The sea otter is a marine mammal that lives near the shores of the northern Pacific Ocean. It is a member of the same family as weasels, but unique in the marine adaptations that earn it living in the surrounding waters and rivers of its habitat area. The sea otter is unique among marine mammals for its lack of blubber as it keeps warm using a very thick coat of fur. Despite its ability to live completely on land when necessary, the otter prefers hunting and breeding in the water.

Sea otters are intelligent and opportunistic hunters. They tend to dive towards seafloors where they can find small marine invertebrates to eat. A special prey of theirs is shelled mollusks and crustaceans that they have adapted an intelligent solution for eating. In order to get past the tough shells of these creatures, the sea otter will use rocks to dislodge the prey and break open the shells. This shows the animal’s intelligence through the use of tools, a very rare example in the animal kingdom and wholly unique in the marine ecosystem.

Place As A Keystone Species

Sea otters have an enormous effect on their surrounding habitat because they are the only predators that can successfully and reliably control the population of sea urchins. Sea urchins, if left to grow uncontrolled, will extensively damage the kelp forests of their habitats making continued existence difficult for many other species. The beginning of this damage has already been seen as the extensive hunting of sea otters for the human fur trade has reduced their numbers to critical amounts within the past several centuries. Conservation efforts have largely succeeded in bringing balance back to their ecosystems, but the sea otter remains an endangered species.

Sea otters are known to rest in small groups called rafts that consist of 10-100 individuals, all of the same gender. They leave these rafts in order to hunt and forage- a procedure that is almost always carried out alone. Sea otters have a number of unique vocalizations that they use to communicate with one another, including seagull-like cries, content cooing, and even cat-like hissing when in danger. Male sea otters carve out a piece of territory and tend to keep a harem of several females during the mating season.