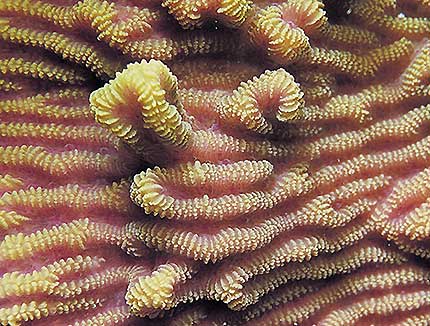 Merulina is a genus of stony small polyp corals that belong to the family Merulinidae. These corals have earned the name ruffled corals, lettuce corals or even cabbage corals. due to their ruffled and sometimes forest-like appearance. The main representative of this genus is M. ampliata.

These corals form colonies that usually grow no more than 1 meter across. Growth patterns vary from one species to another and may well depend on habitat and water conditions. The most common form of growth is that of a ruffled plate or the shape of a fan. However, some species may also exhibit columnar growth or ascendant growth, and, from above, they resemble miniature forests. Colors are mostly green, olive, cream or brown with sometimes pink fringes. These colonies also have sweeper tentacles at the edges which are modified tentacles and they are used to deter the growth of competitor corals or other marine organisms. Sweeper tentacles may reach 8 centimeters in length.

Ruffled corals can be found from the Red Sea to the Gulf of Aden, the Indian Ocean, West Pacific, the Great Barrier Reef near Australia and even as North as Japan. M. ampliata can be found from Australia to the Coral Sea, Houtman Abrolhos Island and Lord Howe Island. Colonies of ruffled corals can often be found in waters with moderate movement. Some colonies have been found at depths up to 40 meters, despite the species being zooxanthellate. However, most colonies live in shallow waters such as in lagoons or around reefs.

The Merulina genus was described in 1834 by Ehrenberg, with 5 known species. However, most of these are uncommon and perhaps the most common one is M. ampliata. This coral forms colonies shaped like ruffled plates and also shows columnar growth. Both growth patterns may be present in the same colony. Colonies with tall columns resemble forests when seen from above. Some columns can be as high as 10 centimeters.

Merulina corals have developed two strategies of feeding. The first one uses their symbiotic unicellular protists called algae, which reside within their tissue to produce carbohydrates through photosynthesis. During the day, the polyps are retracted, and the zooxanthellae are responsible for the production of food. During the night, the polyps come out of their calcium carbonate shells called corallites and they extend their tentacles. These are tipped with nematocysts or stinging cells which are used to paralyze prey. However, most species are semi-aggressive, meaning that they only attack species that swim too close. A lot of food is taken in passively, with the majority of the nutrients being represented by dissolved organic matter.

As with most other small polyp stony corals, the ruffled corals reproduce sexually and asexually. Asexual reproduction is performed through budding or fragmentation, meaning that large fragments containing polyps are broken off by storms and taken in other parts, where they settle and form new colonies. Sexual reproduction can also be seen in Merulina species, with the colonies releasing gametes during synchronized spawning events.