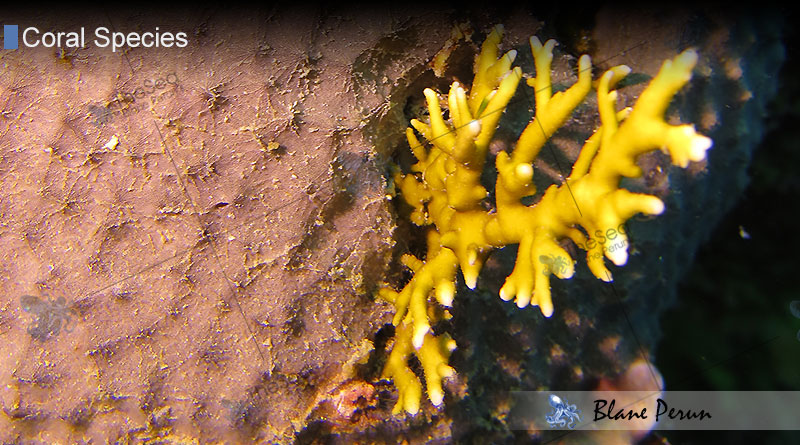 Millepora Alcicornis are a member of the fire coral belonging to the genus Millepora. They are tropical and subtropical, mostly found in the Caribbean Sea and in the Atlantic ocean. Alcicornis live attached to dead coral and rock on reefs in colonies spread over an area of several meters. This coral gets the nickname “fire coral” because of the very painful sting they inflict on their prey, and also on SCUBA divers and snorklers.

Often considered more closely related to jellyfish than coral certainly resemble stony corals. They are calcerous, but despite the often textured pattern of their skeleton, their surface is quite smooth. Tony pinholes, or pores, are scattered across the surface. They contain gastrozoids, or feeding polyps. These are connected beneath the skeleton in a series of canals, which allow nurtrient movement through the colony.

The most visible structures of fire corals are the short, thin, hollow stinging tentacles of the mouthless dactylozoids. The Alcicornis use these potent stinging tentacles for both defense and their primary food capture. They are also a primary means of aggressive takeover of territory occupied by other species.

Fire corals have gained some popularity recently in reef aquariums, especially along the West coast. Millepora Alcicornis can be very tolerant of less than perfect water conditions, but require intense light and high current for maximum growth and survival rates. Other than maintaining their robust color without bleaching or algae growth, it is difficult to know the level of happiness of the corals in a reef tank situation. Proper tank acclimation is important, as with any stony coral.

Although it can be quite painful, stings from a Alcicornis are rarely dangerous unless accompanied by an allergic reaction. The sting caused by these fire corals is the result of the injection of proteinaceous toxin, which causes swelling, blisters and nausea. These symptoms should disappear after 24 hours.

Millepora Alcicornis are a valuable economic resource, as the reefs provide an excellent habitat for hundreds of different types of fish, which in turn provide a consistent source of food and revenue. Fire coral lives on the coral reefs of the Caribbean, one of the most biologically diverse ecosystems on the planet. This habitat is always in danger of human destruction, over-fishing and bleaching.