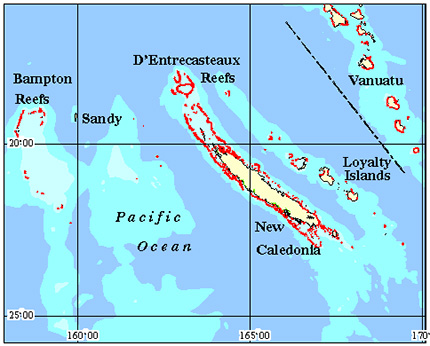 Located between Australia and Vanuatu, the New Caledonia Islands are composed of a group of islands – among them, Grand Terre and the Loyalty Islands. These are very popular tourist resorts and diving spots. Still, the region is mostly known for its abundant corals. Actually, Grand Terre is mostly famous for the New Caledonia Barrier Reef. This coral formation is second only to the Great Barrier Reef in Australia, a feat that cannot be overlooked.

The New Caledonia Barrier Reef reaches a total length of about 930 miles (1,500 km). A lagoon that is 9,300 square miles (24,000 square km) is enclosed by the reefs. The average depth is 82 feet (25 meters). The reefs are situated approximately 19 miles (30 km) off the shore. They further extend almost 120 miles (200 km) to the Entrecasteaux reefs, which are located in the northwest region.

The reefs here are considered an ideal place for marine life to flourish, harboring 15,000 species of marine creatures, 800 of which being endemic to the Caledonian corals (such as Nautilus Macrophalus or the palaemonine shrimp). The corals are home to some endangered animals as well, such as the dugong (Dugong dugon). It also represents an important nesting ground for the green sea turtle (Chelonia mydas).