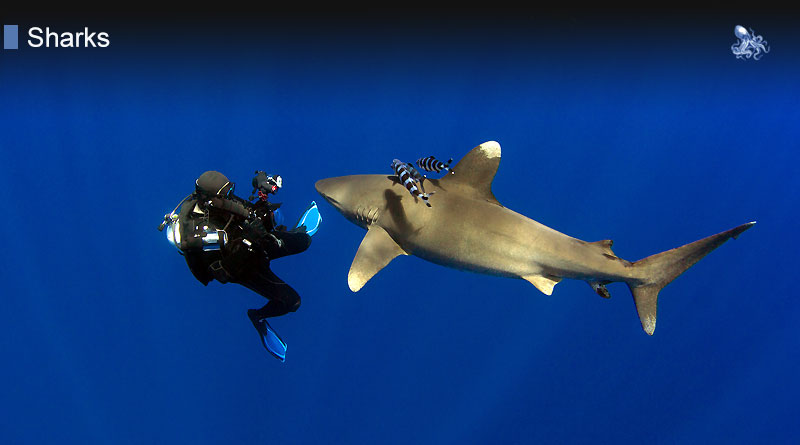 The oceanic whitetip shark is a unique species of fish that is known as quite a powerful predator. Carcharhinus longimanus, as it is known by its scientific name, or silvertip shark, as it is commonly referred to, the oceanic whitetip is a large pelagic requiem shark that usually inhabits certain tropical and temperate waters. Its size and specific traits makes it a slow moving predator that is normally associated with feeding frenzies. The aggressive oceanic whitetip requires specific temperatures and habitat properties in order to thrive, its range being limited to some oceanic and seaside habitats, while also keeping it well away from the shore in most cases.

The most distinguished quality of the brown shark, as the oceanic whitetip is also known, is its limited agility that has helped it develop various other traits to reach the status of a truly feared predator. Despite this seeming drawback, the shark is a very capable hunter that can easily best most types of bony fishes, including large barracudas, lancetfish and dolphinfish. It is also able to eat sea turtles and gastropods and squid, so its diet is quite diverse. Most of the fish that the shark consumes are captured by biting into large groups of fish or swimming through schools of fish with its mouth open.

The oceanic whitetip shark is a large species of shark that differs somewhat from most of its better known cousins. Clearly distinguishable from other species that belong to the family Carcharhinidae, this species, it has a few special qualities that makes it stand out. The shark features rounded fins – particularly the first dorsal fin – that are already a hint at its slow moving characteristics. Its long, paddle-shaped pectoral fins are quite unique, as is the shark’s short, rounded nose and sharp, triangularly shaped teeth. These whitetip or silvertip sharks get their names from the lightly colored tips of their fins which stand in contrast with their greyish bronze to light brown colored bodies.

While oceanic whitetips are not overly fast, they are capable of surprising bursts of acceleration when stalking their prey. Generally, they hunt by lulling their prey into a false sense of security, after which they quickly pounce in to take control, if the opportunity presents itself. They usually compete for prey with silky sharks, and they are extremely competitive, opportunistic hunters. Finally, it’s important to note that silvertips are strongly goal-oriented, conserving energy when food is scarce, and slowly exploring the ocean looking for new hunting opportunities).

Oceanic whitetip sharks generally prefer waters warmer than 18 C, and are usually found in waters where the temperature is between 20 and 28 C. They don’t usually go too deep, staying in waters shallower than 150 meters or so, and they generally prefer offshore areas. Although the oceanic whitetip shark is more common in a few specific regions, the resilience of some specimens has led them to be found as far away from the northern limit of their range as Sweden; also, even though they don’t usually get too close to land, there is no actual rule to this, and some brown sharks have even been spotted as close as 35-40 meters away from the beach in certain areas.