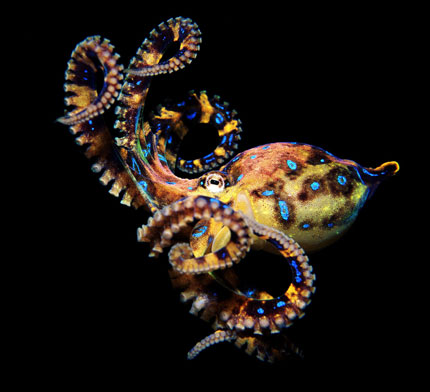 The octopus is a cephalopod mollusk belonging to the order Octopoda. Octopi have two eyes and eight tentacles, as well as a hardened beak at the center of the underside of its body. They are not only invertebrates, but totally lack any skeletal structure at all, and can change their shape in a wide variety of ways. Octopi feature a number of biologically interesting features, such as the ability to expel ink to distract predators, the use of venom, and highly developed camouflage skills. Octopi are also highly intelligent, and often studied for their unique displays of cleverness.

Octopi have three hearts. Blood is pumped to either of their gills by two branchial hearts, and a systemic heart feeds the rest of the body. Octopus blood is markedly different than mammalian blood, using hemocyanin rather than hemoglobin to transport oxygen. Octopi have very keen eyes that are able to distinguish the polarization of light. Their tentacles are unusually autonomous, with their own nerve centers responsible for executing commands issued by the octopus brain. It is thought that octopi have to see their own tentacles to get feedback about what exactly they are doing.

Octopi are often considered some of the most intelligent creatures in the ocean, and most certainly the most intelligent invertebrates. Octopi have been shown to display evidence of short- and long-term memory for the solving of problems and recognition of individuals. The octopus nervous system is highly complex, with neurons shared between the brain and partially autonomous tentacles. These tentacles perform a wide variety of reflex actions without any input from the brain at all. Octopi have been observed using tools in nature, as well as solving complex problems in laboratory environments.

When discovered and threatened, the first reaction an octopus will have is to spray a jet of ink while quickly jetting away from the scene. This ink is not just dark-colored, but also impairs the ability of most predators to smell, allowing the octopus time to find a hiding place. Octopi often employ camouflage, and can change their colors to meet their surroundings in a way that makes them very hard to discover. Their flexible bodies allow them to hide between rocks where other creatures cannot get to them and, in dire situations, they can even release a tentacle as a distraction and then escape.