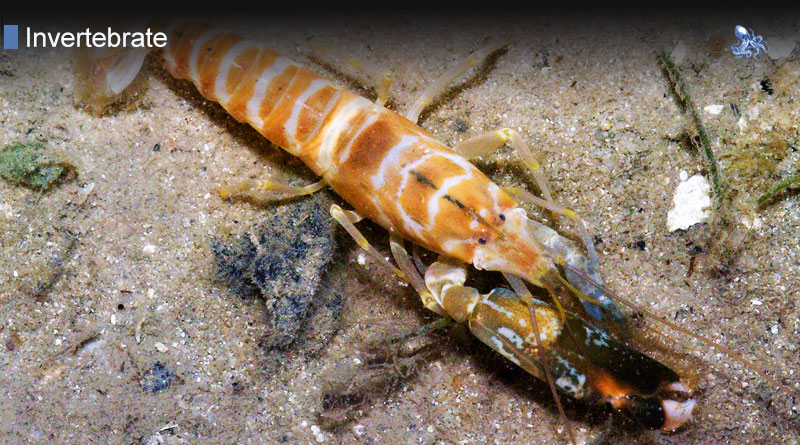 The pistol shrimp is one of the tiniest and, at the same time, most ferocious creatures of the deep sea. Though pistol shrimps are not longer than a human finger, they are incredibly “loud” and effective predators, with bodies that display special features and special abilities – here are just a few of them.

Pistol shrimps are not larger than 1-2 inches long. This little creature has an interesting, disproportionate body, with two arms in the front, one of them more developed than the other. One of the arms – it can be any of the two – ends in a large claw that lacks the pincers seen on other crabs. The pincers seem to be replaced by a joint that looks like a box glove turned backward. Pistol shrimps are very adaptable and very resilient creatures, too. When the shrimp loses its special claw, the limb will regenerate quickly, but the new limb will not be suitable for snapping, the function being taken over by the remaining old limb, the one that was originally the smaller, non-snapping limb. The reason for this switch is probably urgency – it takes shorter to transform the already existing, fully developed claw into a snapping claw than to wait until a new snapping claw is developed.

When pistol shrimps detect prey or they want to scare away predators, they “snap” their claws. When the shrimp closes its enlarged claw, the closing creates a line of cavitation bubbles. The closing happens incredibly fast, which creates the bubble incredibly fast, too, and makes it behave like a small bullet that can kill small fish and wound larger animals.

The bubble is very fast, while the process of creating it is not only fast, but loud as well. When the shrimp shuts its large claw, the acoustic pressure generated by the movement can reach 80 kPa. The bubble itself can reach the speed of 60 mph and releases sound that is louder than 200 decibels, making the tiny shrimp the loudest animal of the world, even louder than beluga whales or sperm whales and certainly louder than man-made machines such as jet airplanes. The bubble is actually so fast and strong that it also produces luminescent effects. In the second of the collapse, the bubble’s temperature is around 4,700 degrees C (by comparison, the temperature of the Sun’s surface is around 5,500 degrees C), producing light upon bursting. However, the light of the bubble is of very low intensity and it is, therefore, invisible to the naked eye.

Marine biologists believe that the snapping primarily serves the purpose of hunting, but it is also used for communication, scaring away unwanted visitors. The shrimp spends most of its time hiding in its burrows, waiting for its prey to swim by. When it senses motion with its antennae, it comes out of its hiding place, snaps its claw to stun the prey, then drags it into the hiding to eat it.

Located in the Straits of Florida, Key West is an island that can be found at the south of the

In late 2004, November I think I traveled to the Bahamas and this was the very first time I had

The Dunguaire Castle is a tower house that dates back to the 16th century, and was erected on the southeastern

September 13, 2017 Comments Off on Powerscourt Waterfall