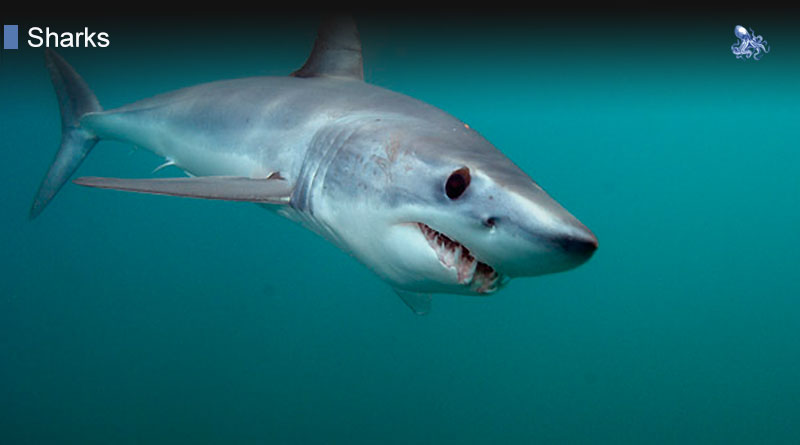 A shortfin mako shark is a special species of shark known scientifically as Isurus oxyrinchus. A large type of mackerel shark, it is commonly placed into the same category as its close relative, the longfin mako, both species being generally referred to as mako sharks. Fast and agile, yet quite heavy and large, mako sharks can survive in colder waters due to their special anatomical properties, but they are predominantly found in temperate and tropical waters.

Unlike in the case of most sharks, the mako species is able to swim relatively fast which makes them capable of attacking a considerable range of fish and other marine animals. Shortfins have been observed to feed mainly on cephalopods and bony fish, but some also eat other sharks, sea turtles or even sea birds. They hunt mainly through fast vertical lunges and by sinking their sharp teeth into their prey with great force and thrust. According to a recent study that has examined the contents of the stomachs of many shortfin mako shark specimens has pointed to the fact that the sharks generally prefer bluefish above all other species of fish, this fish accounting for about 70% of the sharks’ diet.

One of the main traits of these mako sharks is that they are extremely strong, robust and streamlined, being commonly associated with big game fishing. They are strong, fast and extremely active, while also being known for their large gill slits that allow them to breathe more easily, as well as their sharp vision and agile movements that can turn them into a deadly predator overall. Mako sharks are also warm blooded, featuring an endothermic circulatory system that is able to keep their blood at an elevated temperature even in the coldest waters.

There have been quite a few research studies that followed mako sharks and their longevity. While reaching sexual maturity around the age of 4-6 the sharks can live quite a long life, females in some cases reaching 32 years of age before dying, while males being associated with a maximum life span of about 29. Varied age measurements were common before it was known that shortfin makos deposit a regular number of growth bands per year, instead of two – a conclusion that led scientists to believe these sharks only lived up to 11 years in most cases. Shortfins, however, are now far more accurately estimated around a median age of 18-21 years.

Shortfins can be found in waters as deep as 150 meters, on most offshore regions of tropical and temperate waters worldwide. These species of sharks are rarely found in waters that are colder than 16 degrees C. Usually they can be found in the vicinity of swordfish, and they are prevalent in the waters of Argentina, the Gulf of Mexico, Nova Scotia and California. The speed and resilience of shortfin mako shark specimens has been noted by researchers, who have studied individual specimens and concluded that they are able of impressive endurance and speeds, traveling more than 2,000 km in just over a month, averaging about 50 km per day.