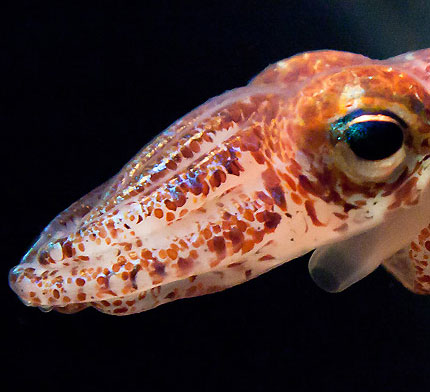 Squid are cephalopods belonging to the order Teuthida. There are 300 species of such cephalopods, and they live in diverse habitats. Some of these animals are the largest of all invertebrates, and they are recognizable because of their large head, eight arms and tentacles and characteristic propulsion system.

Squid have an elongated body, a well defined head, and bilateral symmetry. Being octopods, they have eight arms which are often in pairs, typically having two elongated tentacles. All the organs and body mass is covered by a mantle, with fins covering both sides. Contrary to other marine forms, these fins carry a lesser role in locomotion.
The skin is often rich in chromatophores that help the animal obtain better camouflage both as predator and as pray. The camouflage may also serve to warn predators, and it has been suggested that the rapid changing in colors may serve communication between individuals. At the front of the mantle lies the mouth covered in beak-like chitin structure which serves to kill prey and to tear it into smaller parts that can be ingested. The front opening of the mantle has the siphon structure that is used for locomotion with the help of precise jet propulsion.

While most of these animals are not longer than 60 cm, there are giant species that may well reach 13 meters. There have been events that seem to suggest that there are giant squids, such as when the rubber hull of the USS Stein was cut by tentacles.
In 2003, there has been a new species discovered – Mesonychoteuthis hamiltoni. It appears that this species may grow up to 14 meters, which would make it the largest invertebrate in the world. The largest specimen ever to be scientifically documented is a 10 meter squid that was caught by a fishing vessel of the coast of Antarctica.

These animals can avoid predators by becoming changing their body color with the help of chromatophores, thus becoming invisible. They also have an ink sack, which they can use when under threat. The animal would expel a dark cloud of ink, which is mostly composed of melanin. The cloud may be expelled in the shape and size of the animal, confusing the predator and making it fix its attention on the cloud, while the squid makes a hasty retreat by propelling it via its jet propulsion.