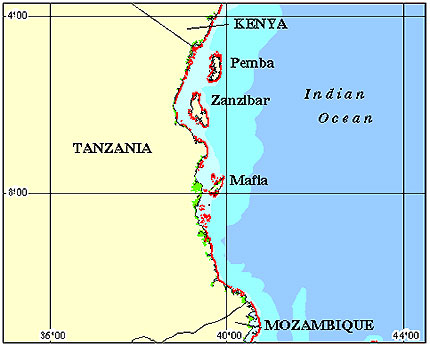 Tanzania coral reefs are known for their beauty and remarkable, pristine condition. These reef formations are accompanied by stable water temperatures of around 25 degrees C (77 F) all year round, plenty of sunshine and good water clarity, being an excellent place for huge corals, as well as parrotfish, barracudas and potato cod – among many other fish species – to thrive.

Famous for places like Zanzibar – where the Mnemba atoll is one of the most famous diving sites in the country, featuring stunning corals, huge sea turtles and majestic manta rays – the peaceful Fundu Lagoon and the vibrant Mafia archipelago, Tanzania is home to beautiful and diverse atoll and fringing coral reef formations that, through the stable habitats they support, house many endangered and rare species of turtles, fish and sea mammals.

The atolls found in the Zanzibar archipelago are particularly known for the large number of reef fish species they support (more than 600 recorded species), as well as for being a nesting place for threatened green turtles, supporting three species of dolphins and being a hotspot for larger sea creatures like humpback whales and whale sharks.

Pemba Island is not as easy to access as Zanzibar, but making the journey can be quite worthwhile. The North Horn of Pemba is known for shark viewing and can feature hammerheads, grey whaler sharks, silver tips and many other species as well.

Finally, the Mafia Archipelago with its large island and several smaller islands plays host to some of the healthiest and most diverse reef formations in Tanzania. Stable temperatures of over 26C and clear waters with visibility of more than 25 meters are what made possible the development and continual thriving of this beautiful underwater paradise.

There is far more to see than meets the eye when it comes to the most beautiful Tanzania coral reefs, and places like Zanzibar, Pemba and Mafia island are only some of the locations where you can find the most stunning, untouched underwater worlds to explore.

Tanzania coral reefs are known for their beauty and remarkable, pristine condition. These reef formations are accompanied by stable water