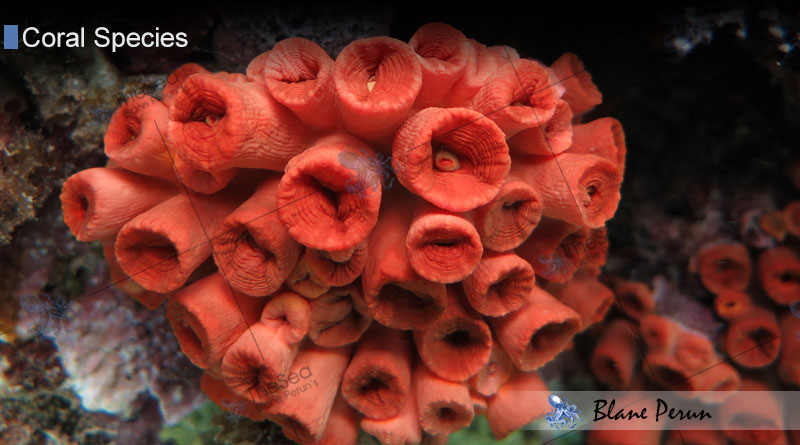 Tubastrea is a genus of stony corals belonging to the family Dendrophyllidae. They are also called sun corals or cup corals due to their aspect when having their tentacles extended and retracted respectively.

The sun corals are large polyp stony corals, meaning that they produce a calcium carbonate exoskeleton. However, they do not forma coral reefs, but just small colonies. Sun corals are branched and the tubular structures hold the large and fleshy polyps. The corallites are well developed and teethed. Tubastrea polyps resemble a sun during the night when they have their tentacles extended for feeding. During the day, these are retracted and so the polyps and visible corallites take the shape of a cup. Colors range from bright orange to dark green. Colonies can grow to 15 centimeters in diameter or even more.

Most sun corals are specific to the Indo-Pacific region. These can be found from the Red Sea to the Indian Ocean, the East China Sea, Ryukyu Islands and the East, North and West Coast of Australia. However, one species, T. coccinea, was first documented in the Caribbean region. This species is invasive. Other species have been introduced to the Atlantic Ocean, the Caribbean Sea, Golf of Mexico as well as Africa, Brazil and New Zealand. Sun corals live in deep waters, caves, with some species such as T. coccinea colonizing even artificial structures. Some colonies have even been found in bright shallow waters from 0 to 3 meters.

Notable species include T. coccinea, the orange cup coral, T. aurea, the yellow sun coral, T. faulkneri, the orange sun coral and T. micantha, the black sun coral. T. coccinea is an invasive species colonizing waters where it is introduced even by accidents. It can also grow and thrive on artificial surfaces, from ship wrecks to cement, steel or granite. T. micantha has smaller tentacles and colors range from dark green to even black in the center area, thus earning its name black sun coral.

Tubastrea species are azooxanthellate, meaning they do not rely on tiny dinoflagellate for food. Because they do not need the sun for photosynthesis, these corals can also thrive in dark areas and at deeper depths than most other corals. Sun corals are heterotrophic so they have to catch their food. They do this by extending their tentacles at night and stinging small zooplankton organisms that draw too close. Digestion takes place in the polyp’s sack. The polyps can also get suspended organic matter from the water column.

Sun coral reproduction can be sexual and asexual. Sexual reproduction is performed during mass spawning events which can happen in spring, summer or even winter depending on the species as well as climate. The resulting free-swimming larvae called planulae reattach to the substrate. New colonies are rarely formed more than 1 meter away from the parent colonies. Asexual reproduction can also be performed through budding, where the original colony forms runners which can grow up to 10 centimeters per year. These Tubastrea runners have polyps at the end that will cement itself on the substrate and form a new colony.