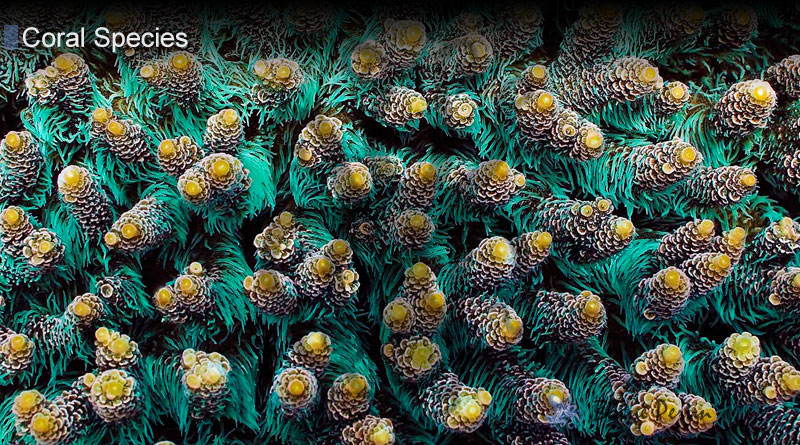 Main Types of Coral Polyps – The Diversity and Evolution of Corals

Despite the fact that many species of corals are threatened today, there are still numerous types of coral polyps still in existence. After an evolutionary process of about 500 million years, corals have become extremely diverse and resilient, and mass spawning between species has allowed their genetic diversity to increase even to a greater extent. Today, scientists are working on understanding more about the diversity of these impressive sea creatures and their ability to survive depending on water conditions and the changes and specifics of the environments they normally thrive in.

When it comes to coral polyps, there are two main types that are known by an important distinction: stony corals that are responsible for building coral reefs and soft corals, their less resilient counterparts which still play a major role in maintaining the marine ecosystems of the planet. Stony or hard corals are characterized by polyps featuring 6 or more tentacles, branching or plated appearance and a distinction between LPS (Large Polyp Scleractinian) and SPS (Small Polyp Scleractinian) corals. Soft corals form into colonies around a central Gorgonin a fibrous, elastic protein that enables coral polyps to move along with the waves. These corals typically grow much faster than stony polyps, and their anatomic structure features no exoskeleton. Both types of species are known to have multitudes of coral polyps forming into colonies that sustain themselves similarly to larger organisms, with the polyps acting as their main building blocks.

Coral polyps form into colonies of different shapes and colors depending on their genetic makeup, behavior and reproductive needs. Staghorn and Elkhorn coral colonies tend to branch out, resembling trees or plants that extend beyond the surface that offers them stability and shelter. Lettuce corals and Brain corals are more unique and compact, featuring interconnected structures that are associated with closer bonds between polyps. Reef-building, hard corals are considered most important to the marine environment, the most common species being Cauliflower corals, Cup corals, Acropora corals and Tube corals.

Coral polyps are at the basis of the coral reef food web, different types of polyps living in symbiotic relationships or just providing shelter for various species of marine creatures. Depending on their size, polyps can support life of every shape and size, soft corals using their own bodies for that purpose, while hard corals build large reef structures housing anything from small fish to copepods, sea snakes and a variety of other creatures. Depending on the types of coral polyps we evaluate, this process differs, as does the threat that certain species might pose to the polyps themselves.