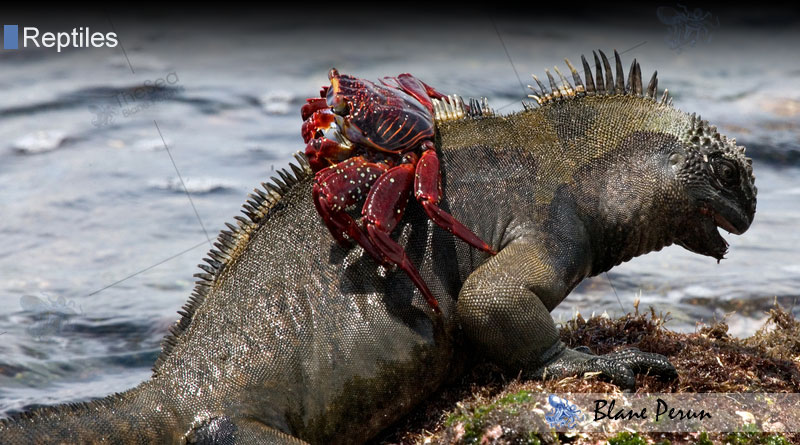 Marine iguanas living on the Galapagos islands have a highly selective eating process. They only feed on certain algae, and also prefer the excrement of their own species and that of several others. This behavior, along with the practice of feeding on various land plants, however, is not common. Marine iguanas can spend as much as an entire hour foraging underwater, and their body temperatures decrease significantly as a result. After resurfacing, they usually have to remain stationary in the sun, usually on the volcanic rocks closest to the shore. This practice, along with their diving habits, foraging success and ability to use vital energy in the algae they eat, varies along with each season and along with the specific area the iguanas reside in.

There are several types of algae that Galapagos marine iguanas feast on. Grateloupia, Gelidium, Hypnea and Polysiphonia are counted among the main types of red algae that the iguanas feed on. Several varieties of green algae may also be preferred when red algae is scarce, and cannot be easily found nearer to the shore. Aside from the rarer brown algae that they also consume, about 10 different species of red and green algae were identified to make up the main bulk of the iguanas’ diet. According to researchers, the marine iguana may also choose to eat the feces of insects, crustaceans and sea lions, while the specific species living on Seymour Island also ingests a land plant known as Batis maritima.

Feeding habits can depend on many factors, including the age and gender of the iguana in question. Males prefer to dive and forage for red algae even during higher tides, while females generally look for food intertidally. The youngest members of the species are known to dive in during low tide periods, when the water currents are less likely to be difficult to tackle. Marine iguanas feed only once per day, and they can also change their foraging behavior depending on temperature and seasonal variances. Most species will be more efficient in their foraging practices on sunny days, when the temperature is at its highest.

Because of the high effort required by most of their feeding practices, and because marine iguanas are unable to regulate their internal temperatures, these species of iguana tend to be stationary for a long time after foraging, in order to raise their body temperatures in the sun. Because they ingest large amounts of salt while feeding, they have to filter the salt from their blood and excrete it through special exocrine glands. The salt may cause the iguanas’ heads to appear white as a result of this process.