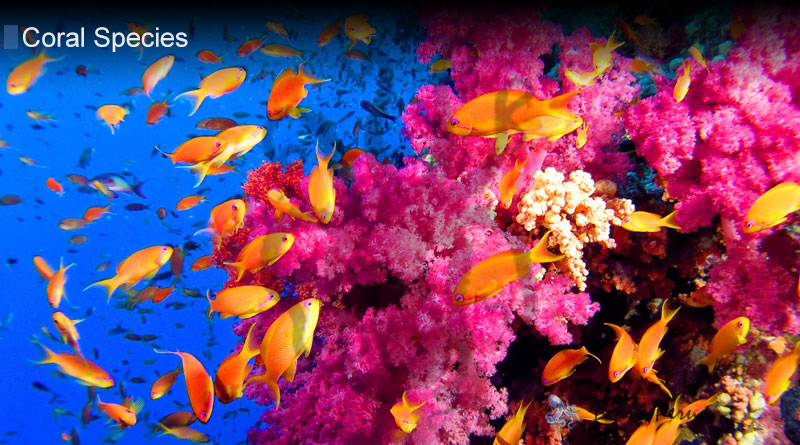 What Gives Coral Its Color and Why Are Reefs so Colorful?

The question of what gives coral its color has been an interesting topic that fascinated scientists for several hundred years. As scientific researched advanced and the ability to look into the details of what makes up marine life at a cellular level continued to improve, the discovery of zooxanthellae and the mapping of the various species of coral polyps has led to some surprising discoveries about the true source of coral colors and appearance.

What Gives Corals Their Color?

The most obvious and direct influence on coral color is the zooxanthellae algae. This known type of algae has a strong symbiotic bond with coral polyps, and its pigment cells actually enter and make their home in the coral’s tissue. Millions of these microscopic zooxanthellae can actually inhabit even a few square inches of coral, and their release of chlorophyll for the purpose of facilitating the photosynthesis process determines the color hue of the coral in a similar fashion as chlorophyll would color leaves in surface-dwelling plants.

Most people have never heard of the K rating or Kelvin rating, but marine biologists know it well. This rating is used to determine coral reef sustainability. The scale is designed to measure how the mixture of light that determines the coral’s color shows its level of resilience and sustainability over longer periods of time. Typically, the cooler the color – such as purple, green and blue – the higher the K rating and the healthier the coral. Lower K ratings are consistent with warm colors like orange and red, while a K rating of zero is most typically associated with the darkest black when it comes to coral coloring.

The Purpose Behind Coral Colors

There is a clear purpose behind corals’ change in color and their use of different colors depending on their environment. Scientists have seen that corals can actually use colors to adapt to stronger sunlight and lesser water clarity, or to determine the strength of the corals they may use as potential mates. Zooxanthellae cells are actually manipulated depending on light intensity, and as light wavelengths are altered by depth, you will find different colors of coral at varying depths beneath the ocean surface. Understanding what gives coral its color can help scientists better understand the relationship between corals and their environment, as well as the deeper purpose behind the necessity for change and evolution, as that environment continues to shift and change.