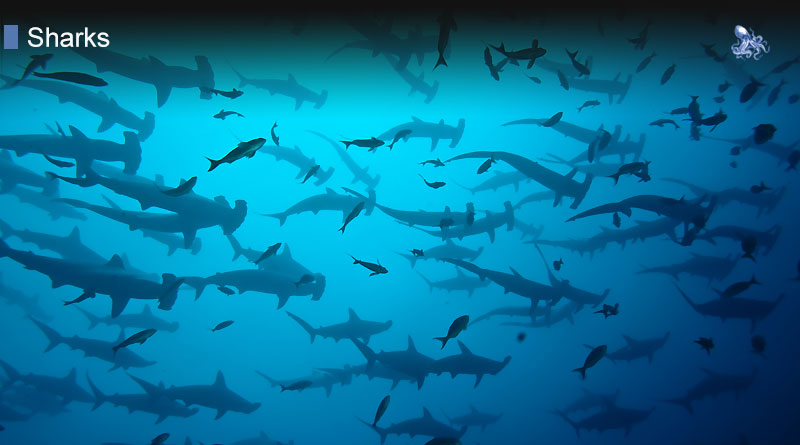 The question of how many sharks are in the ocean is a very difficult one to answer. Sharks are an extremely diversified group, with more than 350 species roaming the world’s oceans, some of them very common and populous, while others numbering only a few individuals. Scientists estimate that there are around 100 million sharks killed by humans each year and sharks are still abundant in the world’s oceans, so there can be billions or even hundreds of billions of sharks swimming around in salt water around the world.

Marine biologists have a number of methods at hand when it comes to assessing the size of the shark population in the world’s oceans. Some of these techniques are used to find out about the migration patterns of fish, while others are used to find out about population sizes, feeding and reproductive patterns or natural mortality rates. It is possible that there are shark species that have not yet been discovered, so the water of the seas and oceans is continuously examined to find creatures that display the features shared by all sharks such as the large liver and the cartilaginous body.
One of the methods used for finding out the number of sharks is sampling. Sharks in a certain habitat are numbered and the results are extrapolated for a larger region. The other frequently used method is based on catching individuals, marking them somehow, then putting them back into their habitat. The marked specimens are monitored, then complex mathematical formulae are used for assessing population size.

Most shark species prefer warm waters, but there are some that live in colder waters. The waters around Africa, around some parts of the Americas and India are the places most frequented by sharks, but some shark species live exclusively in the colder northern waters. The wide range of habitats as well as the migration patterns of sharks makes the assessment about the size of the overall shark population increasingly difficult – there are many species that do not stay in one area, migrating over long distances, in some cases more than 6,000 km a year.

There are numerous species of sharks that are common and abundant, such as the dogfish shark, while others are seriously endangered or on the verge of extinction such as the mackerel shark or the ground shark. Even the shark species that are common and widespread are considered to be unstable because their birth and growth rate is slower than their rate of natural death and the rate at which they are fished. Sharks reach reproductive maturity relatively late during their life, in some cases after they reach the age of 20, so becoming captured before they can reproduce puts shark populations at serious risks.

Sharks come in all shapes and sizes and they live in every sea and ocean of the world. Out of the more than 350 shark species known today, scientists have managed to mark only 30, so there is a lot to do in this field and certainly a lot to find out about how many sharks are in the ocean.